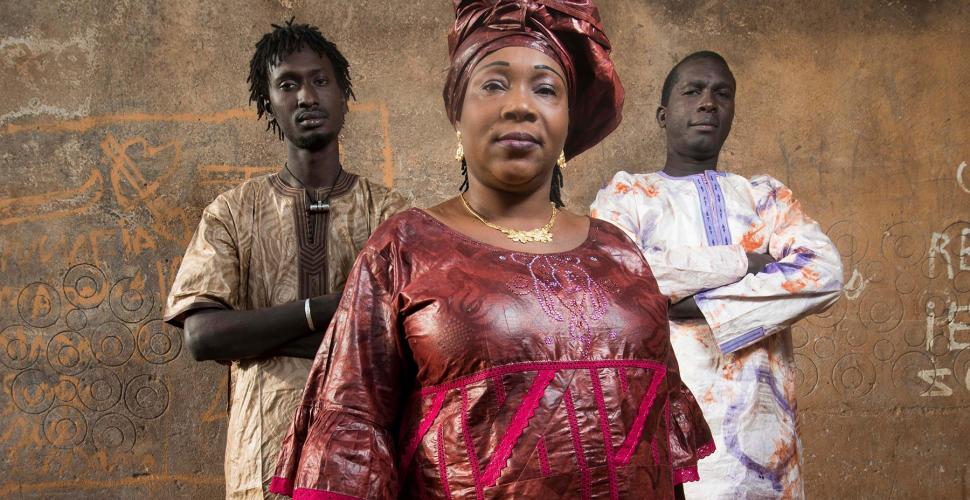 The small, but outstanding griot group Trio Da Kali will meet Norway's perhaps most well known large group, the Norwegian Radio Orchestra, during Oslo World 2021. They will perform the music from a successful, remarkable collaboration the trio did with the Kronos Quartet a couple of years ago.

The album was called Ladilikan and it was released in 2017. It made the meeting between a modern string quartet and griot music, deeply conscious of its own tradition, sound simple. And why not? The influence that different kinds of African music has had on modern orchestral music the last 50 years is well known, for instance in the so-called minimalist music represented by composers like Steve Reich and Philip Glass - both of whom have been recorded by the Kronos Quartet. So rather than making something which sounded like an unexpected, radical fusion experiment, Ladilikan dove deeper. It sounds more like an instance of music returning to its common roots, finding a deep resonance, without pretensions or need of translation. The album is, at the same time, a full expression of the identities of both ensembles.

Trio Da Kali consists of Hawa Kassé Mady Diabaté, Fodé Lassana Diabaté and Mamadou Kouyaté. They come from the Mande culture of southern Mali and a long line of distinguished griots (the musical artisans central to the region's culture). The trio consists of vocals, bass-ngoni and balafoni. They quickly discovered that they had something special in common. “Da Kali” means “to swear an oath”, and it is the griots pledge to maintain their art. In this instance, the musician's focus is different parts of griot repertoire which has been somewhat forgotten today. The fight for this tradition entails renewal, lovely musical surprises and a subtle, finely tuned interplay between three virtuoso musicians.

The Norwegian Radio Orchestra is among Norway's most well known ensembles. In 2021, they celebrate their 75th jubilee. Since 1946, the orchestra has been dear to Norway's music culture. They have performed music from every genre, both on their own and together with some of Norway's biggest artists. They are constantly searching for new possibilities, and music outside of the western classical tradition. They have collaborated with Oslo World several times, where  they have done concerts with Toumani Diabaté from Mali, taarab musicians from Zanzibar and the tunisian artist Emel Mathlouthi. In their seventy fifth year, it is time for a new memorable meeting.