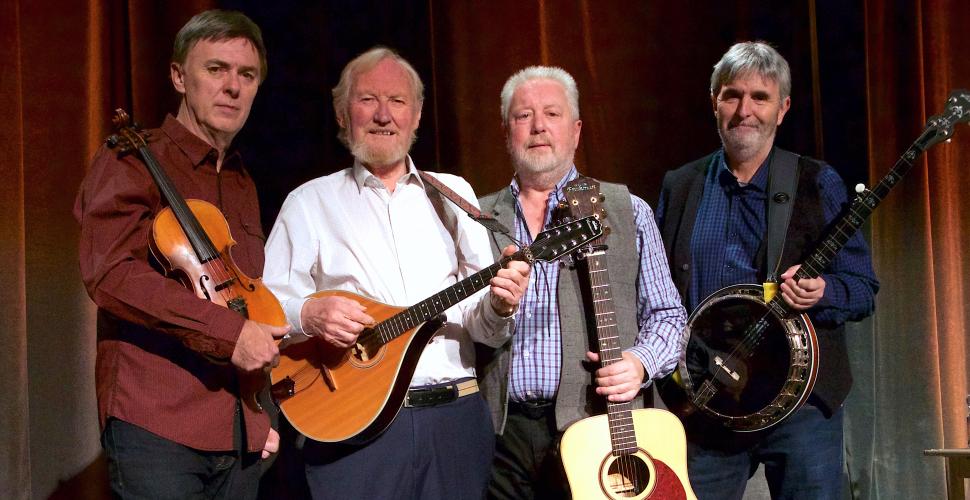 Prepare for an evening in the company of musical legends and well-known classics! Whiskey in The Jar, Dirty Old Town, The Wild Rover, Seven Drunken Nights, The Rare Auld Times, Finnegan's Wake, Molly Malone, The Monto, Hand Me Down Me Bible, The Irish Rover, Black Velvet Band and many, many more.

Get the chance to experience the legends of Irish folk music - Sean Cannon, Shay Kavanagh, Paul Watchorn and Paul Kelly, as they, under the name The Dublin Legends, carry on the legacy of The Dubliners, which was broken up when "Banjo" Barney McKenna sadly died.

Sean Cannon has been a member of The Dubliners for almost 30 years, while Watchorn and Kavanagh are relatively new members. Under the nickname «Super Sub», Paul Kelly steps in as deputy for banjo virtuoso Gerry O´Connor. Kelly has a long career within Irish folk music, and plays multiple instruments such as percussion, banjo, mandolin and fiddle. Throughout his career, Paul Kelly has played with legends such as The Sackville String Band and The Fleadh Cowboys, and has performed with names such as Peter Rowan, Tex Logan and Kenny Baker.

Back in 2012, The Dubliners celebrated their 50th anniversary in the service of music and received a Lifetime Achievement Award from the BBC Radio 2 Folk Awards, which was fulfilled by a completely sold out UK tour. After this tour, John Sheahan decided that after 50 years on the road, it was time to get a well-deserved break. Under the name The Dublin Legends, the other band members Sean Cannon, Shay Kavanagh, Paul Watchorn and Gerry O'Connor (with Paul Kelly as deputy) have decided to continue the musical legacy, which was founded by Ronnie Drew, Luke Kelly, Ciaran Bourke , Barney McKenna and John Sheahan back in 1962.

"It's too late to stop now," Barney once said. Sean, Eamon, Patsy and Gerry have taken the wise words to heart.